Engel did many independent photo projects, and some of his earliest and most important are of Rebecca and her family and Fred the shoeshine boy. He photographed Rebecca and her family for two weeks, creating a unique series of her everyday life in and around her Harlem apartment, and at school. Engel found Fred the shoeshine boy on 10th Street where he lived, and photographed him shining shoes, having fun with his friends, and with his family. Some of the photos from these two series are some of his most known images. In addition, he photographed a horse auction in Williamsburg, Brooklyn, which was fairly unusual, and also dockworkers down at the Hudson River piers. 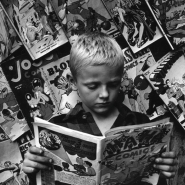 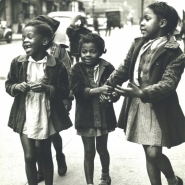 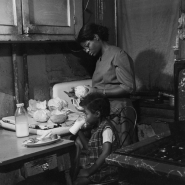 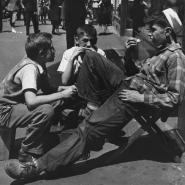 Coney Island played a major role in Engel’s photographic development. As a teenager, he lived in Coney Island and Brighton Beach, and went to Abraham Lincoln High School. Engel photographed the crowds at the beach with his Rolleiflex. He would sit on the sand taking candid photos, and people would be unaware he was taking their photograph. This led directly to Coney Island being the the major element in his film “Little Fugitive.” Shot in 1952, the film is about a little boy who is tricked into thinking he shot his brother and runs away to Coney Island. The film captures a little boy adrift in the huge crods on the beach. Using a hand-held small but high quality 35mm motion picture camera (that he helped design) he was able to be completely mobile following the actions of the boy. “Little Fugitive” was nominated for an Academy Award, won the Silver Lion at the Venice Film Festival, and was credited by Francois Truffaut for helping to start the French New Wave.